Located in the heart of downtown Philadelphia, the Pennsylvania Convention Center is one of the few convention centers that is uniquely woven into the city’s landscape, offering visitors the opportunity to immerse themselves in and enjoy the full cultural, culinary, and retail experiences of the city. More than 14,000 hotel rooms and hundreds of restaurants, shops, historical attractions, and cultural institutions are within walking distance of the Center.

In addition, the Center boasts more than 82 meeting rooms that can be set in banquet, classroom, or theater seating and one of the largest ballrooms in the Northeast, equivalent to the size of a football field. The Center’s large size provides the ability to simultaneously and comfortably host multiple large trade shows and conventions.

Under the management of world-class facility operator ASM Global, the Pennsylvania Convention Center and its staff host nearly 250 events a year, ranging from internationally-attended conventions to regional company retreats. We offer decades of combined expertise and we are committed to providing the best experience possible for anyone who walks through our doors.

There are plenty of comfortable lounges, sprawling balconies and terraces with unmatched views of City Hall and the Museum Mile along the Benjamin Franklin Parkway. Attendees can rely on technical support, WiFi connectivity, digital signage and smart rooms inside the PCC to make any event interactive and user-friendly. 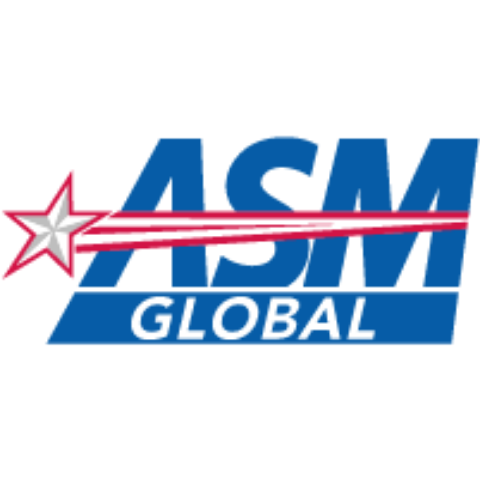 At the Pennsylvania Convention Center, ASM Global adds programs, systems and talent to ensure that facility operations run smoothly and that every meeting feels like a celebration to meeting planners, exhibitors and attendees. 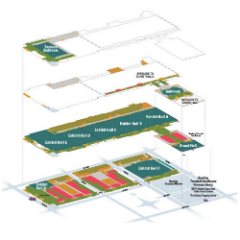 The expanded Pennsylvania Convention Center is one of the country’s premier meeting facilities. 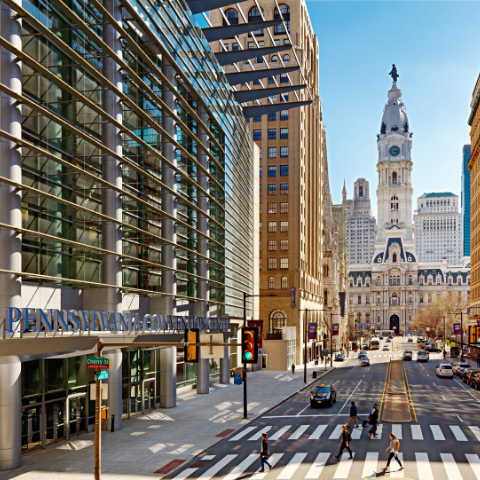 View photos and videos of the Pennsylvania Convention Center and the surrounding area. 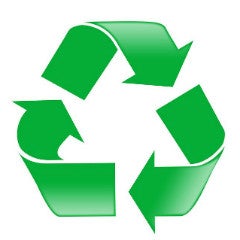 ASM Global is operating the Convention Center under its best practices for sustainability and green meetings. 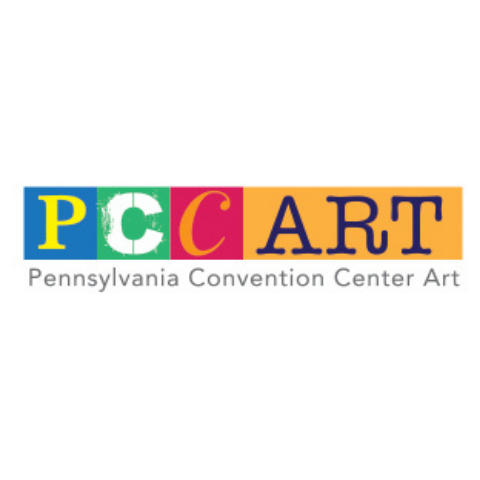 Art Collection at the Convention Center

The annual GBAC STAR reaccreditation process focuses on a facility's program development, through a cycle of continuous evaluation and improvement, to ensure the facility remains effective at maintaining and delivering a program that supports a clean, safe and healthy environment for workers and guests. 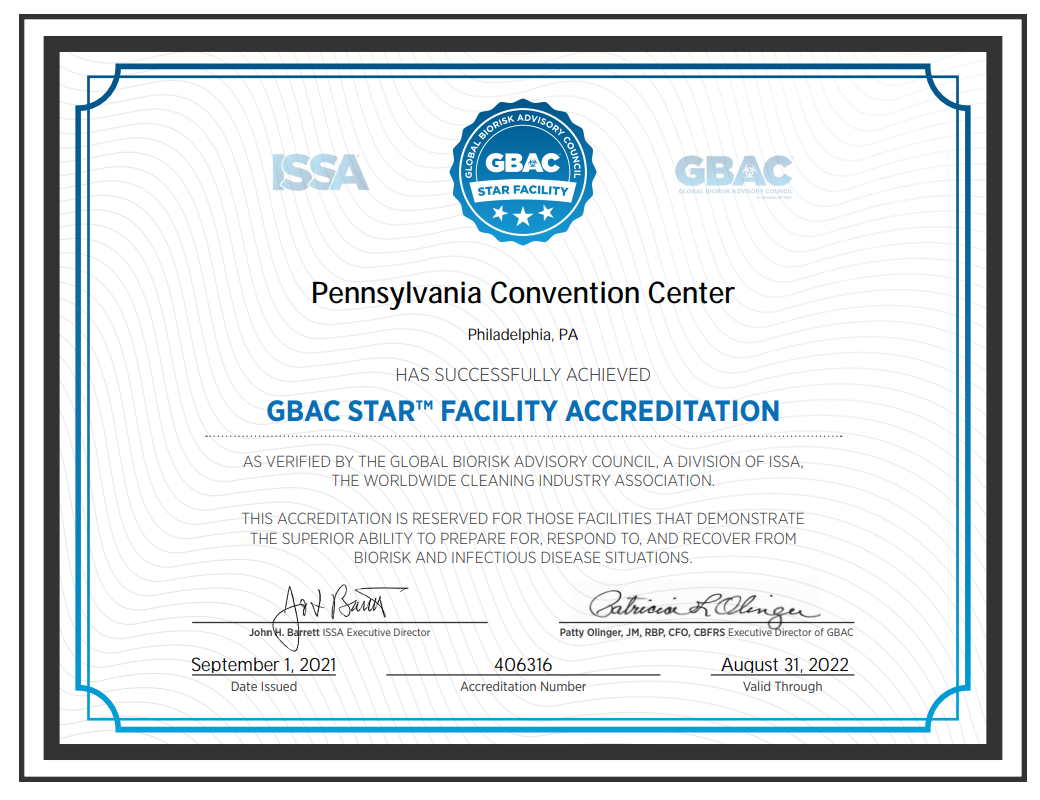 The Pennsylvania Convention Center (PCC) received the Global Biorisk Advisory Council (GBAC) STAR accreditation on outbreak prevention, response and recovery. Recognized as the gold standard of safe venues, the PCC is one of the largest venues in the northeast to receive the GBAC STAR™ accreditation.

GBAC STAR Facility Accreditation identified the Pennsylvania Convention Center as a showcase example of commitment to ensuring a clean, safe, and healthy environment for its employees, customers, and stakeholders. This accomplishment also demonstrates the Center’s leadership in transforming the cleaning industry into an essential part of any business. 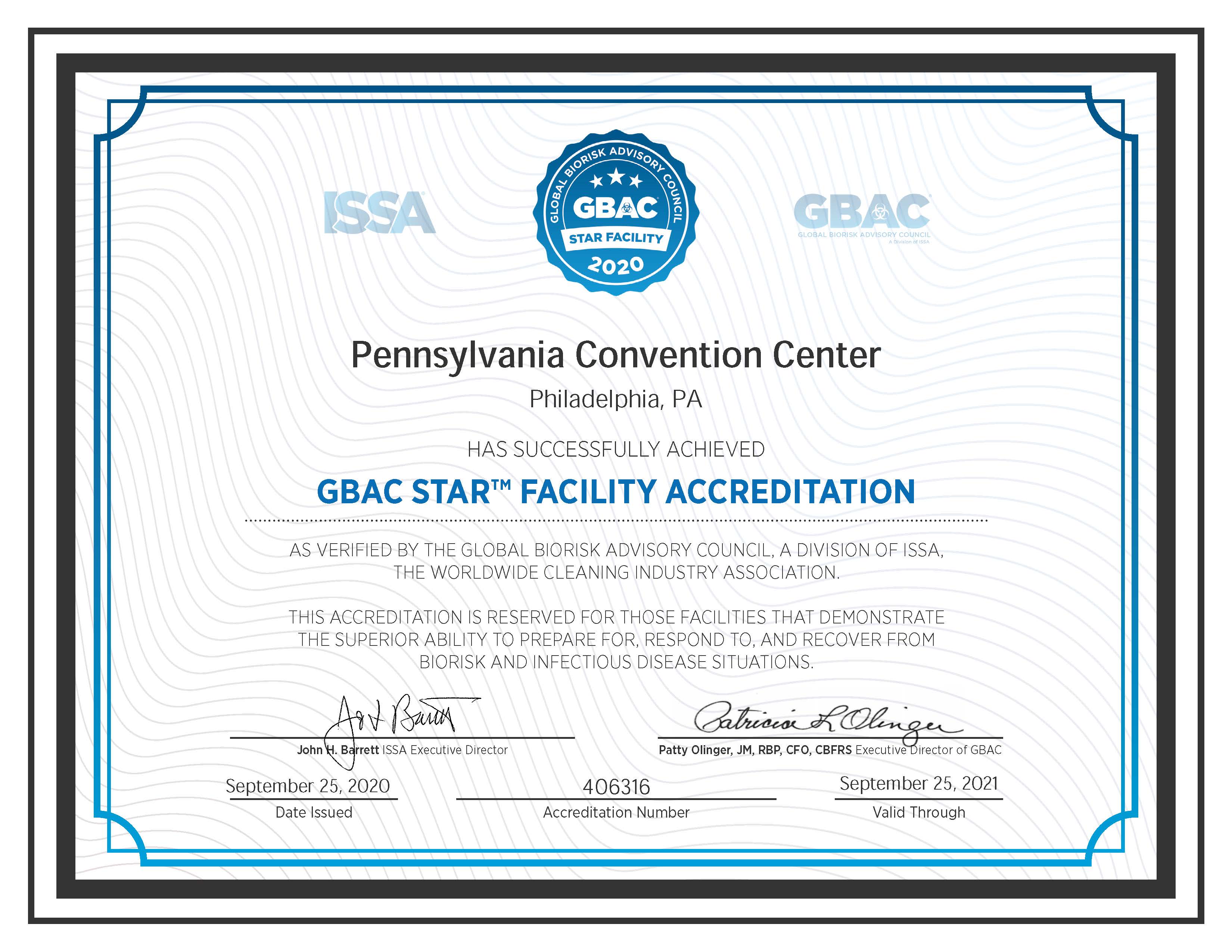 The City of Philadelphia and the Pennsylvania Convention Center earned the distinction of being ranked one of the top ten U.S. Cities for Green Meetings by GreenBiz. Greenbiz.com cited a number of factors at the Pennsylvania Convention Center that led to its high ranking, including its LEED Gold certification for its 2011 expansion; its use of 100 percent decomposable and biodegradable food and beverage products and Green Seal-certified cleaning products; its use of renewable energy; and energy-efficient lighting and other energy-saving initiatives. The rankings of convention centers were developed based on standards for sustainable meetings as set forth by the Convention Industry Council’s Accepted Practices Exchange (APEX) and the American Society for Testing and Materials (ASTM International). The ASTM/APEX standards for sustainable meetings provide a barometer of environmental integrity across nine sectors of event production: transportation, audiovisual, accommodation, onsite office, meeting venue, food & beverage, exhibits, destinations and communications.

The Greater Philadelphia Hotel Association (GPHA) presented the Pennsylvania Convention Center Authority’s Board of Directors with the Heart of Philadelphia Award and the four unions that perform work on the show floor of the Center with its Headliner Award. These awards were presented for the roles of the Board and labor organizations in improving the hospitality business in Philadelphia and at the Convention Center. The GPHA highlighted the Center’s hiring of ASM Global, the realignment of the Convention Center management, and the development and implementation of a new customer service agreement and positive work environment in the Center.

The purpose of the Best Panel Award given by the American Council of Engineering Companies of Pennsylvania is to promote the communication of engineering excellence by creating displays that are visually exciting and stimulating to read, as well as promoting achievements in the engineering profession. A panel of communications professionals served as judges, and presented the Best Panel Award to Pennoni Associates for their Pennsylvania Convention Center project.

LEED® Gold Certification from the US Green Building Council

The Expansion and Renovation to the Pennsylvania Convention Center achieved Leadership in Energy and Environmental Design (LEED®) certification. The Expansion’s LEED rating corresponds to the GOLD certification level under the LEED for New Construction rating system. LEED is an internationally-recognized green building certification system, developed by the U. S. Green Building Council (USGBC).

2011 Project of the Year- March of Dimes Transportation, Building and Construction Awards

The Southeast Division March of Dimes awarded the Pennsylvania Convention Center with the 2011 Project of the Year award for the Convention Center’s Expansion Project. The award honors the leaders in public and private sectors of transportation, building, and construction industries.

The honorees were selected by a committee of their peers and honored for their achievement and leadership in their respective professions and for their efforts to promote economic development within Southeastern Pennsylvania.

Philadelphia s Center City District, a special services district that helps keep the city clean, safe and attractive, polled Philadelphians on what they love about Center City. The Pennsylvania Convention Center was named the Best Public Investment in the Last 10 Years. The PCC was recognized for $2 billion in convention related spending and $225 million more in taxes that it has generated since opening in 1993. PCC has 1.3 million square feet of space, including 315,000 square feet of continuous exhibit space, a 31,512-square-foot ballroom, 34,960-square foot Grand Hall and a second 125,120-square foot exhibit hall. The grand hall, which is built into the historic Victorian building that was once the Reading Railroad Train Shed, is a dramatic one of a kind space with a majestic arched ceiling. The Pennsylvania Convention Center is located in the heart of Center City Philadelphia.

The 2006 Planner’s Choice winners were announced in the December issue of Meeting News. Winners were chosen by meeting planners nationwide, on a top of mind basis. Voters based their nominations on service and expertise of the staff, quality and number of services provided and timely response and follow-up to any questions or problems. Also considered are amenities, food & beverage quality and meeting facilities.

Best of the Best Award

PCC received a Best of the Best Award from the BOMA at its TOBY Awards Competition for its extraordinary art collection. The PCC’s $2 million, public collection of contemporary American art includes 73 purchased art works and 18 site-specific installations that are punctuated throughout the 1.3 million square foot facility.

Expo, the magazine for exposition management, named the PCC to its list of Top Major Convention Center Openings and Expansions of the past decade. The PCC, which opened in 1993, was featured in the November/December 2001 issue of the publication, which targets exposition managers and association executives.

Meeting News Magazine recognized PCC in its December 2001 listing Planner’s Choice Awards, which gives recognition to convention centers and other facilities that strive to deliver the highest levels of service, accommodations and meeting facilities.